Irate Pirate \ noun: The label given to very angry pirates. Often characterised by more cursing and waving of swords, flintlock Pistols, and other object than usual.

“The pirate staggered into the tavern. Cursed at avery second person they passed, and stuff from their last voyage. That was one irate pirate. “

I rate pirate \ phrase: The act of rating the efectiveness, usefulness or appearance of a pirate. Often used when the first mate rated new recruits, the crew about each other, and people in the ports the pirate ships would dock in.

I rate pirate \ noun: An early social media platform created by Whiteberg the pirate to rate the performance and appearance of fellow pirates. Due to the popularity on ship, the platform was expanded and evolved into the current HookBook. A platform hugely popular with those stuck on boats with nothing else to do (in the small amouts of time when off duty).

After the popularity of HookBook was realised, an IPO (Initial Pirate Offering) was run, which brought in many chests of gold coins. This allowed further development of the platform, and made Whiteberg very rich overnight.

“Agent P, your contact will be at the German pub. Prepare for some steinography.”

What makes you a local?

One night in the last weeks of Chris Bath’s Evening show on ABC Sydney she asked the question â€œwhat makes you a local?â€.

I lived for a year in Tokyo. And it was interesting to see when you became a local.

Are you a local when you know all about the location? Or does it require other locals to treat you as if you belong?

I think familiarity is what makes you a local. I remember at the begin everyone treated me like a random foreigner. Being white you really stick out.

Over time, interacting with staff in the local stores and eating establishments, I could see peopleâ€™s attitude towards me changed. The staff were more comfortable dealing with you, and more likely to help when your Japanese wasnâ€™t good enough or you were stuck trying to workout bureaucracy (like paying bills).

By the end of the year I had learnt to navigate public transport, pay my bills at convenience stores and which ATMs worked with foreign banks. I had got used to the different scale of maps, everything is closer together than Sydney. And there were parts of the city I was comfortable dealing with without a map (this is before everyone carried an iPhone to find their way).

So had I become a local? What did the people where I lived think?

I felt more of a local. And while I may not have been a â€˜localâ€™, I had at least become their foreigner (to the establishments and places I frequented).

Coming back to Sydney I could see similar patterns to what I observed in Tokyo. With the exception (mostly) of language, familiarity and the way you interact with people is what makes you a local.

You may not know about all the secrets about an area. But how people interact with you makes you more a local. That people will help you if you get stuck, and not just because it is their job, I think that is what makes you a local.

Cryptoecurrency (or Crypt toe currency)\ noun:
A currency used by grave robbers, necromancers, and other denizens of graveyards. Mostly comprised of toes collected from dead bodies.

I browse recipes vs. Eyebrows recipes

I browse recipes \ phrase:
What you do when trying to decide what to make for dinner. Normally in a cook book or online.

Eyebrows recipes \ noun:
When you are making dinner and your eyebows malt into what you are preparing.

The Blog with No Posts

It’s lonesome away, while your writing and all
By the screen glow at night, where the cursor does call
But there’s nothing so lonesome so morbid or drear
As a blog with no posts for a whole friggin year

Art on traffic light controller. “days one” by Stephen Evens 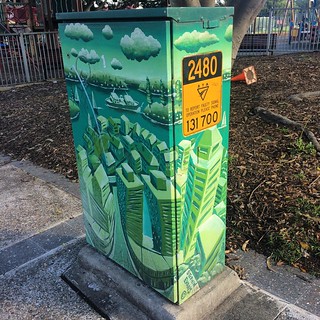 How does your suburb deal with monotony of every day utility objects and make them more interesting?

Walking around Bondi Junction I found some nice beautification, including art on traffic light controller. These are all titled “days one” by Stephen Evens.

I’m sure are more than these 3 I found around the streets. 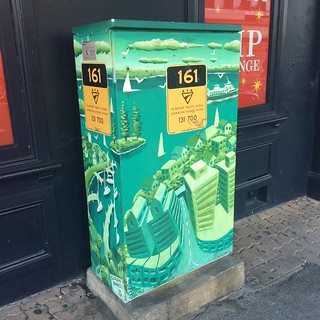 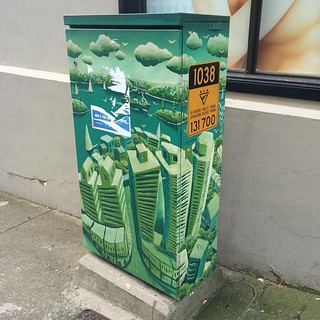 UFO descents through clouds at sunset to snatch man

A striking image I caught at sunset in Chinatown, Sydney. The man looks over his shoulder, just as the UFO descends to snatch him. 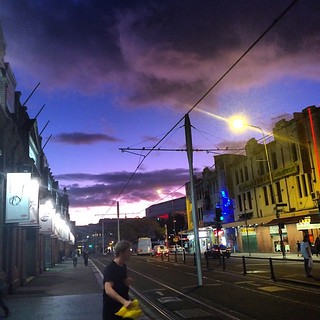 220g @CadburyAU blocks are on special at @Woolworths, except they are only 200g blocks

So who’s job is it to make sure that shelf labelling is correct? Is this a misleading advertising issue? A unit pricing issue? Or something else?

There wereÂ at least 12 mislabeled sale tagsÂ forÂ chocolate on the shelves. And the incorrect tagsÂ have been up since 22 April. (dates are at the botton of the tags)

Of cource, the sale is probably to distract from CadburyÂ shrinking 220g chocolate blocks.

Schemes Cobra couldn’t achieve, but the banks are trying

io9 put together a list of The 14 Dumbest Schemes That Cobra Ever Came Up With On G.I. Joe. Some really wacky ideas, what do you expect from a kids cartoon? But not all of them are totally insane. Some have merit, just bad implementation.

5) Destroying All Currency, “Money to Burn”
Cobra creates a device that destroys all the world’s currency. This completely absurd, impossible device is somehow not the stupidest part of the plan; the stupidest part is that Cobra Commander thinks that people will trade their non-cash valuables, likely jewelry, to him for a new currency which is basically a new gold coin with his face on it. Ignoring the fact that even if people did somehow agree Cobra Bucks would be the new world currency, the loss of all that cash would completely destroy the economy and probably civilization, and Cobra would basically rule the world of Mad Max.

This plot is not that insane. And many banks would like to do it.

Most of the world’s currency exists in electronic form. With only part of it being physical banknotes and coins. All the long term deposits in banks are just stored in computers.

As I see it, destroying all the (physical) money would have 2 advantages:

So, Cobra wasn’t too insane. They just need to work on scheme implementation.